Salamanca : meetings at the Dominican convent of San Estéban 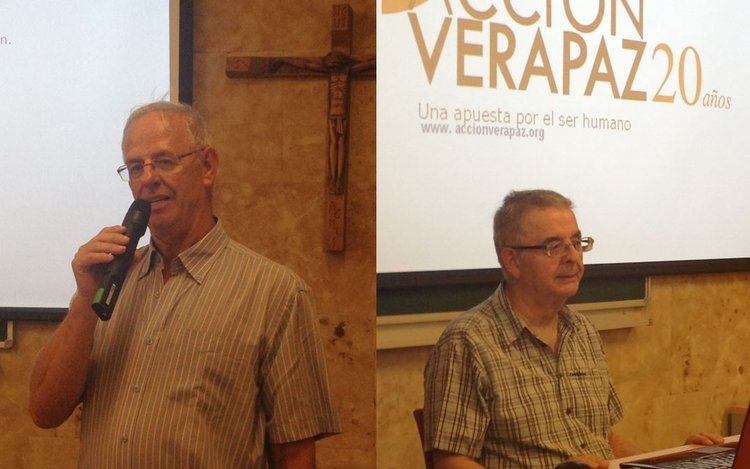 On Tuesday, August 11, we met with two Dominican friars at the convent of San Estéban in Salamanca. The meeting with our brothers came after a brief tour through this lovely town : university, cathedral, house of shells, plaza mayor… all of these told us a little about the history of the town. Thank you to the sisters who were our guides.

Fr. Juan Almarza, op, explained the Salamanca process to us ; it was begun at the last general chapter of the friars in Trogir in 2013. The process consists of a particular mode of ongoing collaboration among friars committed to mission and friars who dedicate themselves to study, as was the case in the 16th century between the missionaries to the New World and the friars of the convent of San Estéban in Salamanca. The process reiterates that dialogue is more especially crucial in three areas : 1. vulnerability : peoples and persons who are threatened in their lives, dignity, culture (migrants, native peoples, minorities, populations displaced by violence and the exploitation of resources, etc.) 2. the search for meaning and relevance : the effort to understand causes, difficulties, and possible conflicts (for example, because of national, cultural, or religious identity, Pentecostal churches, etc.) 3. secularism : the abandonment of faith and religion, agnosticism and indifference

Fr. José Antonio Lobo shared his mission as president of the NGO Acción Verapaz. http://www.accionverapaz.org/ is a non-confessional NGO that seeks to promote and implement justice and peace in the world. Its agents stand for common values inspired by the humanist spirit of Pedro de Córdoba, António Montesinos, Francisco de Vitória, and Bartolomé de Las Casas who, in their time, defended indigenous people in the region of Verapaz in Guatemala. The NGO works around three options : for the poor, for justice, and for peace. Democracy and participation are its foundations. Its mission seeks the development and empowerment of marginalized persons ; it sponsors sensitivity and awareness training in society, the formation of volunteers, and the promotion of human beings. The values of Verapaz are those of human rights—justice, equality, solidarity, and peace—as well as more specialized ones : transparency, independence, and pluralism. What energy, generosity and strength in fr. Antonio’s commitment ! A powerful witness for which we are grateful.