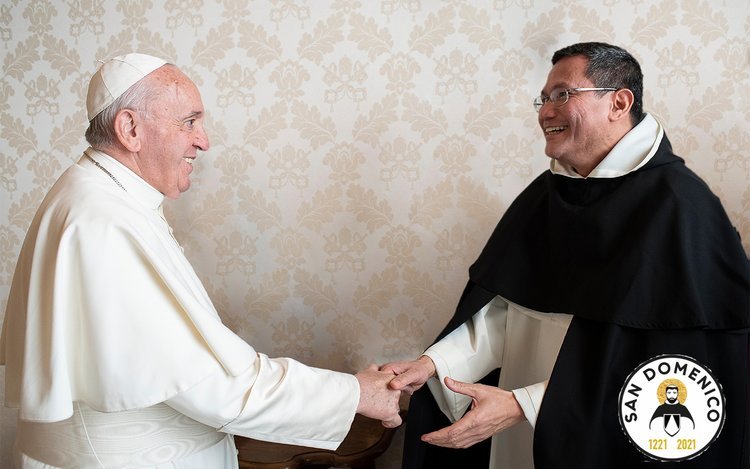 Today, May 24, 2021, Pope Francis sent a Letter to the Master General of the Dominicans, Brother Gerard Francisco Timoner III, for the VIII Centenary of the death of Saint Dominic

To Brother Gerard Francisco Timoner, O.P., Master General of the Order of Preachers

Praedicator Gratiae  : among the titles attributed to Saint Dominic, that of “Preacher of Grace” stands out for its consonance with the charism and mission of the Order he founded. In this year that marks the eight hundredth anniversary of Saint Dominic’s death, I gladly join the Friars Preachers in giving thanks for the spiritual fruitfulness of that charism and mission, seen in the rich variety of the Dominican family as it has grown over the centuries. My prayerful greetings and good wishes go to all the members of that great family, which embraces the contemplative lives and apostolic works of its nuns and religious sisters, its priestly and lay fraternities, its secular institutes and its youth movements.

In the Apostolic Exhortation Gaudete et Exsultate I expressed my conviction that “each saint is a mission, planned by the Father to reflect and embody, at a specific moment in history, a certain aspect of the Gospel” (No. 19). Dominic responded to the urgent need of his time not only for a renewed and vibrant preaching of the Gospel, but, equally important, for a convincing witness to its summons to holiness in the living communion of the Church. In the spirit of all true reform, he sought a return to the poverty and simplicity of the earliest Christian community, gathered around the apostles and faithful to their teaching (cf. Acts 2:42). At the same time, his zeal for the salvation of souls led him to form a corps of committed preachers whose love of the sacred page and integrity of life could enlighten minds and warm hearts with the life-giving truth of the divine word.

In our own age, characterized by epochal changes and new challenges to the Church’s evangelizing mission, Dominic can thus serve as an inspiration to all the baptized, who are called, as missionary disciples, to reach every “periphery” of our world with the light of the Gospel and the merciful love of Christ. In speaking of the perennial timeliness of Saint Dominic’s vision and charism, Pope Benedict XVI reminded us that “in the heart of the Church, a missionary fire must always burn” (Audience of 3 February 2010).

Dominic’s great call was to preach the Gospel of God’s merciful love in all its saving truth and redemptive power. As a student in Palencia, he came to appreciate the inseparability of faith and charity, truth and love, integrity and compassion. As Blessed Jordan of Saxony tells us, touched by the great numbers who were suffering and dying during a severe famine, Dominic sold his precious books and, with exemplary kindness established a center for almsgiving where the poor could be fed (Libellus, 10). His witness to the mercy of Christ and his desire to bring its healing balm to those experiencing material and spiritual poverty was to inspire the foundation of your Order and shape the life and apostolate of countless Dominicans in varied times and places. The unity of truth and charity found perhaps its finest expression in the Dominican school of Salamanca, and particularly in the work of Friar Francisco de Vitoria, who proposed a framework of international law grounded in universal human rights. This in turn provided the philosophical and theological foundation for the heroic efforts of Friars Antonio Montesinos and Bartolomé de Las Casas in the Americas, and Domingo de Salazar in Asia to defend the dignity and rights of the native peoples.

The Gospel message of our inalienable human dignity as children of God and members of the one human family challenges the Church in our own day to strengthen the bonds of social friendship, to overcome unjust economic and political structures, and to work for the integral development of every individual and people. Faithful to the Lord’s will, and prompted by the Holy Spirit, Christ’s followers are called to cooperate in every effort “to give birth to a new world, where all of us are brothers and sisters, where there is room for all those whom our societies discard, where justice and peace are resplendent” (Fratelli Tutti, 278). May the Order of Preachers, now as then, be in the forefront of a renewed proclamation of the Gospel, one that can speak to the hearts of the men and women of our time and awaken in them a thirst for the coming of Christ’s kingdom of holiness, justice and peace !

Saint Dominic’s zeal for the Gospel and his desire for a genuinely apostolic life led him to stress the importance of life in common. Again, Blessed Jordan of Saxony tells us that, in founding your Order, Dominic significantly chose “to be called, not sub-prior, but Brother Dominic” (Libellus, 21). This ideal of fraternity was to find expression in an inclusive form of governance, in which all shared in the process of discernment and decision-making, in accordance with their respective roles and authority, through the system of chapters at all levels. This “synodal” process enabled the Order to adapt its life and mission to changing historical contexts while maintaining fraternal communion. The witness of evangelical fraternity, as a prophetic testimony to God’s ultimate plan in Christ for the reconciliation and unity of the entire human family, remains a fundamental element of the Dominican charism and a pillar of the Order’s effort to promote the renewal of Christian life and the spread of the Gospel in our own time.

Together with Saint Francis of Assisi, Dominic understood that the proclamation of the Gospel, verbis et exemplo, entailed the building up of the entire ecclesial community in fraternal unity and missionary discipleship. The Dominican charism of preaching overflowed early into the establishment of the varied branches of the larger Dominican family, embracing all the states of life in the Church. In succeeding centuries, it found eloquent expression in the writings of Saint Catherine of Siena, the paintings of Blessed Fra Angelico and the charitable works of Saint Rose of Lima, Blessed John Macias and Saint Margaret of Castello. So too, in our own time it continues to inspire the work of artists, scholars, teachers and communicators. In this anniversary year, we cannot fail to remember those members of the Dominican family whose martyrdom was itself a powerful form of preaching. Or the countless men and women who, imitating the simplicity and compassion of Saint Martin de Porres, have brought the joy of the Gospel to the peripheries of societies and our world. Here I think in particular of the quiet witness given by the many thousands of Dominican tertiaries and members of the Dominican Youth Movement, who reflect the important and indeed indispensable role of the laity in the work of evangelization.

On the Jubilee of the birth of Saint Dominic into eternal life, I would like in a particular way to express gratitude to the Friars Preachers for the outstanding contribution they have made to the preaching of the Gospel through the theological exploration of the mysteries of the faith. By sending the first friars to the emerging universities in Europe, Dominic acknowledged the vital importance of providing future preachers with a sound and solid theological formation based on sacred Scripture, respectful of the questions posed by reason, and prepared to engage in disciplined and respectful dialogue in the service of God’s revelation in Christ. The Order’s intellectual apostolate, its numerous schools and institutes of higher learning, its cultivation of the sacred sciences and its presence in the world of culture have stimulated the encounter between faith and reason, nurtured the vitality of the Christian faith and advanced the Church’s mission of drawing minds and hearts to Christ. In this regard too, I can only renew my gratitude for the Order’s history of service to the Apostolic See, which dates back to Dominic himself.

During my visit to Bologna five years ago, I was blessed to spend some moments in prayer before the tomb of Saint Dominic. I prayed in a special way for the Order of Preachers, imploring for its members the grace of perseverance in fidelity to their founding charism and to the splendid tradition of which they are heirs. In thanking the Saint for all the good that his sons and daughters accomplish in the Church, I asked, as a particular gift, for a considerable increase of priestly and religious vocations.

May the celebration of the Jubilee Year shower an abundance of graces upon the Friars Preachers and the entire Dominican family, and usher in a new springtime of the Gospel. With great affection, I commend all taking part in the Jubilee celebrations to the loving intercession of Our Lady of the Rosary and your patriarch Saint Dominic, and cordially impart my Apostolic Blessing as a pledge of wisdom, joy and peace in the Lord.