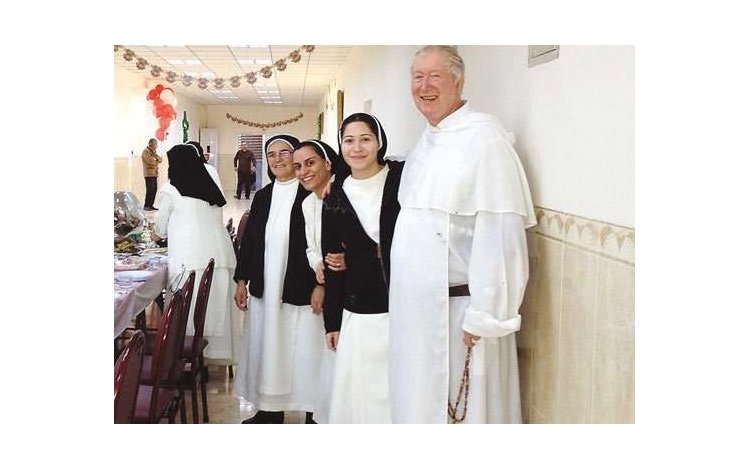 Driving into Baghdad from its fortress airport a few weeks ago, I was greeted by innumerable Santa Clauses and, ironically in this desert land, forests of plastic Christmas trees. Sometimes my Dominican brethren gather with Shi’a Muslim friends around the trees and together remember the birth of Christ, but for most people in Iraq the image of Santa with his snowy white beard and red coat does not evoke the charitable bishop saint from the Middle East, St Nicholas; it is simply a tantalising symbol of the Western consumerism from which most people in this oil-rich but poor country are excluded.

The last time Brian and I had visited Iraq was shortly after Da’esh (IS) had captured Mosul and hundreds of thousands of Iraqi Christians had fled the plains of Nineveh for the relative safety of Kurdistan. Many had had to leave their cars four miles from the Kurdish frontier and complete the journey on foot in the hot sun, since Erbil was so clogged full of the refugees’ vehicles that no more were being allowed in. One of the Dominican Sisters, Hanna, told me she had just made it to the safety of the Kurdish capital when she heard that her father had been left behind. She got a cart and went back to carry him to safety. Then she was told that there was an old Muslim man who could walk no further, and so she again went back: another eight tough miles to collect him and bring him back with her in 50C, but a small sign of an interreligious friendship that even Da’esh could not extinguish.

In the ancient city of Kirkuk, 148 miles north of Baghdad, the walls of the sisters’ convent are still pockmarked by bullet holes and a grenade blast from an attempt by Da’esh to break in to kill them. On the other side of the road is a small hospice for women university students of all faiths. The terrorists broke in; eight girls hid under the beds for seven hours, listening in petrified silence to the jihadists describing what they would do with the girls when they came back. Eventually the terrorists left and the girls were saved. Some of the sisters have resumed teaching in the University of Mosul, but they face daily harassment and aggression. Many students, especially from the south of Iraq, assume that any woman not wearing the hijab is either immoral or encouraging male attention.

The convent and schools of the sisters in Qaraqosh had been destroyed by car bombs. The immediate priority is to rebuild the kindergarten and school. The sisters are scattered, living in threes and fours in the houses of relatives. So far, about a third of the population has returned. A teacher told me: “Because the sisters have come back, we can.” The pupils plastered the walls of the school with pictures of the return from exile, showing people holding the keys of the town. A teacher told us, “Even if the tree looks dry, there is a green branch.” She meant the sisters.’

All over the plains of Nineveh the sisters are reopening their schools. Muslim parents are eager for their children to attend them, since the Iraq’s education system is in freefall. But the sisters are mocked by some parents, who tell them that soon the sisters will be gone and the schools will be theirs. It is hard to give your lives to the education of children, when many of their parents are watching you with impatient and jealous eyes. The faces of the children are marked by fear and exhaustion. Some applaud us when we arrive; others cower under the desk with hands over their ears, afraid of the noise. Sometimes the Christian pupils are taunted by their Muslim companions as “heathens” who will soon be gone. But we also saw Muslim and Christian children playing together. In Baghdad, a class of teenage girls assured us that their friendships, crossing the barriers of religion, would last. In the town of Alqosh, 31 miles north of Mosul, a group of Yazidi students asked if they could come to visit the convent, because “This is the home of God.”

Perhaps it is here in these classrooms that the seeds of a new Iraq are being sown. Like the sower in the parable, the sisters and the lay teachers scatter the seed; some fall on rocky ground or among thorns, but from the small amount that falls on fertile land, the Lord will surely give an abundant harvest beyond our imagination. Forming the young to think is a refusal to succumb to the meaninglessness of violence.

We encountered similar ambiguities in the sisters’ hospital in Baghdad. The maternity ward is presided over by Sister Bushra OP, who delivers on average 30 babies a day. She is known as “the mother of Iraq”. Brian bent down to pick up a newborn child. He looked at me and said, “Timothy, I am holding the future of Iraq in my arms.” A nurse reminded us in a quiet, sad voice: “No one holds Iraq in their arms.” So it may seem, but Bushra and her staff do. Her maternity ward has the best equipment, supported by organisations such as Aid to the Church in Need. Here also, friendships are formed around cradles which may give birth to a new Iraq. Muslim, Christian and Yazidi parents share the drama of new life. But here too, there is the fear that some staff are simply waiting for the sisters to go, so that they can take possession.

But the sisters hang on, even when their families have fled to the West or are waiting in Jordan and the Lebanon for visas to allow them to travel. The sisters’ faithful abiding is a sign of our loyal Lord, whose last words were: “I am with you always, to the end of the age” (Matthew 28.20). They do not criticise those who have gone. Maybe they had no option. But staying is a quiet witness to their hope that the light of our Christian faith will continue to shine here, where Christians have lived since the beginning. A few Christians are coming back. In Kirkuk, we met a married man who had found refuge in Sweden but had come back home, wanting his children to grow up in the land of their ancestors. He is about to be ordained a permanent deacon.

The sisters are not just hanging on with gritted teeth. Everywhere we were feasted with masguf [UNITAL], the grilled carp that is the national dish. Yes, we saw a country exhausted by the violence which has never let up ever since the Iran/Iraq war broke out in 1980, which was nearly broken by the hardship of sanctions, then the two gulf wars, and finally the rise and, at least temporary, fall of Da’esh. Yes, the country hardly seems to hold together, divided as it is by so many religious and ethnic tensions. Yes, it is certainly a moment of crisis for the diminishing Christian population. But everywhere we met the infectious joy of our sisters. These Dominican sisters have lived through worse crises, such as the jihad against Christians in 1915 which led to the brutal martyrdom of seven sisters; still they remained. Their endurance, their commitment to education and to care of the sick, and above all their joy, is a sign of hope in our Lord who never deserts us.