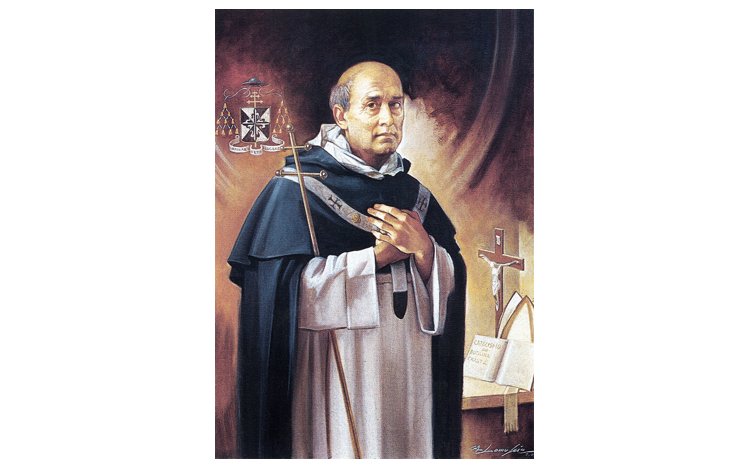 Bartolomé Fernandes was born in Lisbon on May 3rd, 1514. He took the nickname "the martyrs" in memory of the church of Santa Maria dei Martiri where he was baptized and where his grandfather took him to pray every day. After vestition (November 11th, 1528), he made his novitiate at the convent of Lisbon and completed his studies of philosophy and theology in 1538. He later became a reader at the convent of Lisbon and later in the convents of Batalha and Évora (1538-1557). Finally, he was elected prior of the convent "de Benfica" in Lisbon (1557-1558). He was appointed Master in Sacred Theology by the General Chapter of Salamanca in 1551, a very important chapter because among the eight Masters in Theology was the famous Bartolomé Carranza de Miranda, whom Bartholomew himself defended in Trent against the condemnation of the Spanish Inquisition. In 1559, he was elected Archbishop of Braga on the recommendation of Catherine of Habsburg and on the advice of the Servant of God, Luis de Granada, his brother, friend and future biographer. From 1561 to 1563, he participated in the Council of Trent, where he became one of its main actors and protagonists, particularly with regard to the reform of the clergy and bishops. Back in Braga, despite the very strong and repeated opposition of the local clergy, he deployed all his zeal to reform the diocese in the spirit of the Tridentine decrees, convening in 1564 the Diocesan Synod and, in 1566, the Provincial Synod. In 1571 or 1572 the construction of the Seminary of the Council began in Campo Vinha. On February 23rd, 1582, he resigned as Archbishop and “Primate of Spain” and retired to the Dominican convent of Santa Cruz, in Viana do Castelo, (which he founded himself in 1561) to devote himself with humility and poverty to studies, prayer and preaching. It was there that he died, as a simple brother, on July 16th, 1590, when the whole city already acclaimed him as the holy archbishop, father of the poor and the sick. His tomb is currently in the church of Santa Cruz in Viana do Castelo.

Saint John Paul II beatified him on November 4th, 2001, the feast of Saint Charles Borromeo, of whom Bartholomew was friend and master. Their meeting in Rome was decisive for the young Milanese cardinal, not only because he confirmed his choice to leave the Roman Curia and go to Milan to exercise his episcopal ministry, but also because, thanks to Bartholomew’s advice and example, he undertook the reform of the Ambrosian diocese.

Bartholomew of the martyrs is one of the most important figures in the history of the Church in the first modern era. As Archbishop of Braga, he participated in the Council of Trent and it was through his presence and interventions that the Council approved the decree on the reform of the episcopate. He embodied a model of the new bishop born of the Catholic Reformation, and a pastor according to the evangelical model of the late Bartholomew, who already in his lifetime enjoyed an excellent reputation for holiness among his contemporaries. But this holiness, universally recognized today, cannot be limited to the sphere of the pastoral ministry carried out for years in the local Church of Braga in Portugal and vigorously defended in its integrity at the Council of Trent, and it must also be understood and revealed in the other areas of his earthly life : a humble and poor son of St. Dominic ; an¬ assiduous reader of¬ Holy Scripture and a profound connoisseur of theology and spirituality ; a learned¬ teacher, ready to dispense doctrine, as well as what he had learned in his studies and prayer, with clarity and eloquence ; a religious, contemplative and apostolic at the same time, perfect witness to this¬ traditional and known¬ definition of¬ the¬ priest brother who goes back to St. Thomas Aquinas, according to which the charism of the¬ Dominican is that of contemplari et contemplata aliis tradere.

His canonization, requested in the past with such tenacity by the¬ Portuguese Church and the Order of Preachers, is based on the conviction that the latter and the whole Church needed such a saint : remembering the¬ example of his life is important to deepen Dominican spirituality¬, the¬ ministerial ¬priesthood¬, the episcopal munus and the spirit of service and renunciation that always characterizes him in his commitment to the Church and the people who are entrusted to him.

The importance of his message to the pastors of the Church, never tarnished and always uninterrupted over the centuries, was confirmed in the gesture of Saint Paul VI at the end of the Second Vatican Council, when he gave each father of the Council a copy of the Bartholomew’s book, Stimulus Pastorum. Today, it is surprising to see the undeniable closeness between the content of the writings on the episcopal ministry of our Blessed, the lifestyle assumed before and after his appointment as Archbishop of Braga, the indomitable attitude towards the work of evangelization and reform and the magisterium of the current Pontiff, Pope Francis, who, from the very first declarations and speeches, had the opportunity to linger with new accents and original images on the pastoral style of each priest who, according to him, must model himself on the image of the pastor who always defends and guides the sheep entrusted to him and to whom he consecrates and offers his life.