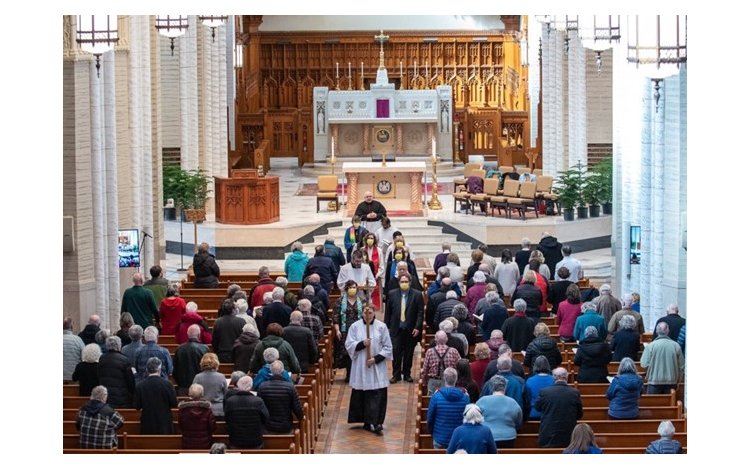 On Sunday, March 13, 2022, the Sabattus Community participated in an interfaith service celebrated for peace in Ukraine and for all those suffering from the violence of war in our world. The service was held at the Basilica of Saints Peter & Paul in Lewiston, Maine.

Rev. Daniel Greenleaf, pastor of the Prince of Peace Parish in Lewiston, led the service, and was joined by the Rev. Annie Baker-Streevy, pastor of Calvary United Methodist Church in Lewiston, Brittney Longsdorf, multifaith chaplain at Bates College in Lewiston and others who spoke of the Russian invasion and those whose lives have been ravaged by it. Fr. Greenleaf said parishioners had initially approached him about a prayer service for Ukraine. “It grew from there,” he said. “Why not invite as many people as possible, because of the Basilica being in the middle of Lewiston. Then, we can invite all the different religious communities in Lewiston and Auburn and we can all come together and pray.” At the beginning of the service, before introducing Lewiston Mayor Carl Sheline, Fr. Greenleaf said, “We gather here on this day to pray most especially for peace in Ukraine and for world peace.” Sheline, who described the violence in Ukraine as “senselessness,” said, “While many of you worshiped separately in different congregations this morning, we are seated in unison this afternoon because we believe we are called to be together in these hard times.” Baker-Streevy later read Psalm 46 from the Book of Psalms, citing its “variety of human emotion” and repeating the phrase, “God is in that city.” Rev. Patrick Finn told a story of Pope John Paul II’s 2001 trip to Ukraine and his awe with its people’s resilience. At the entrance to the basilica, Catholic Relief Services and the Knights of Columbus, on behalf of the Ukraine Solidarity Fund, collected donations that attendees gave in cash or through a QR code on their cellphones. “I’ve been following the news like everybody else, and it’s heartrending what’s going in that country. It’s beyond belief,” said Paul Baribault of Lewiston. “There’s pain all over the world. In the 21st century, it’s hard to believe that something like this is going on, but I’m so heartened to know that people are responding locally to something that’s happening across the world. It shows the good-heartedness of people in general.”