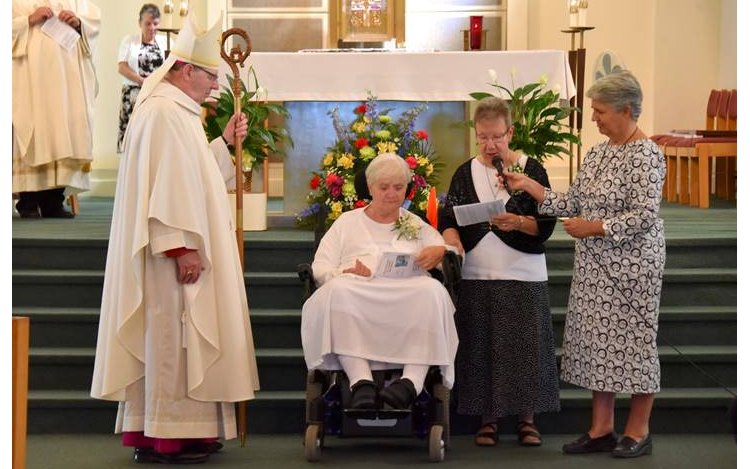 Two members of the Dominican Sisters of the Roman Congregation, who together have served the people of God for 110 years, marked their jubilees with a Mass celebrated by Bishop Robert P. Deeley at Holy Cross Church in Lewiston on Sunday, August 25 (ten pictures below). Sister Francesca Cloutier, OP, who is originally from Lewiston, is celebrating her 60th jubilee, while Sister Therese Demers, OP, a Skowhegan native, made her temporary commitment to the sisters 50 years ago. “God has been always the One there in my life. I knew him when I was very little, and I always talked to him,” said Sister Francesca. “When I entered the convent, it was just going to meet my loved one.” “He’s the anchor that has sustained me all my life — in difficult moments, in good moments,” said Sister Therese. “For me, God is always there.” Both sisters credit the presence of the Dominican Sisters in Lewiston Catholic schools for helping them recognize their call to religious life. Sister Francesca had the sisters as teachers both at St. Peter School and St. Dominic High School, while Sister Therese, whose family moved from Skowhegan to Lewiston, first encountered them at St. Dom’s. “One day, one of the sisters asked if I had ever thought of religious life. Of course, I dismissed the idea, but it was the sowing of the seed,” she recalled. “I really love their focus on the word of God, the Order of Preachers, so your whole life is focused on God’s word and Scripture. I love the Scriptures. I had a Scripture class in high school, and that opened a new door for me.” Sister Therese began her religious formation in Brookline, Massachusetts, but then went to Rome, Italy, to complete her religious training. After returning to the United States, she taught elementary education, first in Brookline and then in Staten Island, New York. She made her final commitment to the Order in 1975, and then was assigned to Davenport, Iowa, where she continued to teach, while studying for her master’s degree in counseling and theology. She would go on to serve as a pastoral associate at several parishes in Iowa, before returning to Maine in 1997, where she became coordinator of the Dominican Retreat House in Litchfield. She then took clinical pastoral education courses, which led to her becoming chaplain at Central Maine Medical Center in Lewiston. She served there for 13 years until retiring in 2016. Sister Therese has also held leadership positions within her community and province, and in 2017, she was elected to serve as a general counselor for the congregation, a ministry that takes her around the world to meet with sisters. “The rewards of being a sister are the sense of community, the deep faith-sharing times, the wide variety of ministries that came my way and caused me to grow and develop as a full human person, and the joy of sharing the Word and simply being a presence. I think my focus is being a presence. I’m now in leadership, and I see my task as being really a listener, someone who accompanies, someone who is there, allowing what is within the person to simply emerge,” she said. Sister Francesca also began her religious formation in Brookline, but her postulancy took her to Mortefontaine, France. When she returned to Maine, she studied to become an educator. She taught in schools in Sabattus and Lewiston, as well as in Brookline, Rome, and Staten Island. “I enjoyed teaching because I think it was a part of me,” she said. “I love the children very much. They were precious to me, and to me, for all the years that I taught, all my students, they were the best that you could get. I loved them so much.” After teaching for 25 years, she, too, took courses in clinical pastoral education and was certified as a hospital chaplain, becoming a grief and bereavement counselor and director of pastoral care at a Staten Island Hospital. She retired in 2001 due to a spinal cord injury. “Both Sister Francesca and Sister Therese followed St. Dominic in teaching, and both then spent time caring for the sick and dying as hospital chaplains. These charisms from God, for the building up of the kingdom of God in our midst, touched lives that only God knows,” said Father Daniel Greenleaf, pastor of Prince of Peace Parish in Lewiston, who delivered the homily for the jubilee Mass. “We have no idea of the extent of our impact. Every once in a while, God gives us a glimpse, but mostly, it is presented to God to do with it what God wills.” During the Mass, Sister Francesca and Sister Therese renewed the vows they had made 60 and 50 years ago. Standing beside them, in addition to the bishop, was Isabel Barroso, prioress general of the Dominican Sisters of the Roman Congregation. Sister Isabel is based in Rome and traveled from a meeting in France to attend the Mass. “To be able to celebrate important events in the lives of the sisters is important,” she said. “That is a way of pointing out that you belong to a bigger family. My presence isn’t me, but what I represent. I represent the larger family, so with my presence, all the other sisters are here to celebrate and be with them.” Brother Irénée Richard, OP, shared the Gospel reading during the Mass, while Sister Christine Plouffe, OP, led the Prayers of the Faithful. Sister Monique Belanger, OP, was the pianist, with music offered by the Holy Cross Church choir. At the conclusion of the Mass, the sisters were surrounded by well-wishers and many whose lives they have touched.