May 24: Translation of the body of St. Dominic 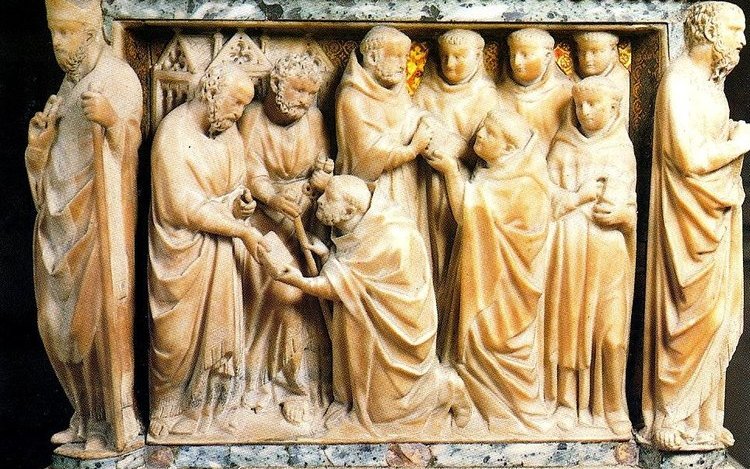 When the tomb was opened, a wonderful fragrance spreads and impregnates all those who were present. God was giving testimony to his servant Dominic, who through his preaching had spread “the fragrance of Christ.” (2 Corinthians 2:15)

On this feast day, I would like to share with you a few thoughts from one of the scenes carved by Nicola Pisano (1267) on the sarcophagus of St. Dominic in Bologna. Two important events are evoked which the artist admirably unified by representing Dominic twice: kneeling and facing Peter and Paul, and on the same axis, standing and turned towards his brothers. It is Constantine of Orvieto who, in his “Life of St. Dominic” (no. 25), unites the two scenes: “while the servant of God, Dominic, was in Rome and praying in God’s presence in St. Peter’s for the conservation and expansion of the Order, the hand of God came upon him. He saw Peter and Paul appear. Peter gave him the stick; Paul gave him the Holy Book and both added: “Go and preach, because God chose you for this ministry.” Then in and instant, he seemed to see his sons scattered throughout the world, going two by two preaching the Word of God to the people.” We are in January 1217, Dominic is 47 years old. It is at St. Peter’s of Rome that he receives confirmation of his mission as universal preacher. Already, since 1206, he roamed the Lauragain region, between Toulouse and Carcassonne, to announce in this cathar region the good God, Creator of heaven and earth, his son Jesus Christ, incarnate in our flesh, who died and rose again for our salvation, and the Holy Spirit who continues the work of God in the Church of saints and sinners. And in 1215, Bishop Foulques of Toulouse gave to Dominic and the small group of brothers the status of preachers in his diocese. But in Rome, he senses a larger call to broaden the horizon, to sow even more good seed, “because he knew that wheat bears more fruit if widely disseminated and will rot if it remains in a heap.” (Pierre Ferrand, Legenda Sancti Dominici, 31) That is why, in Toulouse, May 14, 1217, Dominic announces to his brothers – they are only 15! – that he will disperse them. And on August 15, in Prouilhe, he sent them, divided into four small groups, to Spain and Paris. We observe on the sculpture of Nicola Pisano Dominic who gives the Book of the Word, received from Paul to one of his brothers. On the right, another brother is holding the Holy Book of God’s Word in his hands and close to his heart, while behind him, three other brothers looking at Dominic await their turn to be sent forth. All the lines of the stage, all eyes converge on the figure of Dominic who receives and gives the Word. “Every saint is a message that the Holy Spirit draws from the richness of Christ and offers to his people. To recognize what the Lord means through a saint (…) one needs to consider the totality of one’s life, all the pathways of sanctification, (…) the meaning of the whole person.” (Pope Francis, Gaudete Encyclical 21-22) In Dominic, we can truly say that his whole person can be summarized in “go and preach”; it is the heart of his mission, is reason for being.

To celebrate Saint Dominic, means not only to admire the founder of the Order of Preachers, but letting ourselves be challenged as Dominicans by this call: “Go and preach” which must encompass our whole life. Dominic was also referred to “as the man with soles of wind”…and us, where will the wind of the Spirit lead?