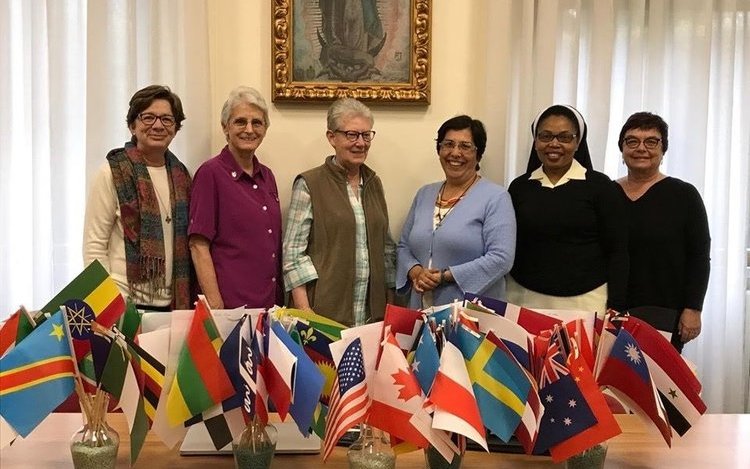 ROME May 12, 2019 – With a flourish of national flags from countries around the world, Dominican Sisters International (DSI) held its Ninth Triennial General Assembly, May 12-17, 2019 here in Rome. “Quilting Threads of Collaboration : Spaces of Encounter, Renewal and Hope,” was its theme.

Teresa Maya, CCVI, Past-President of the Leadership Conference of Women Religious in the United States, was the featured speaker. She was particularly struck by the feminine nature of our preaching charism and that “the women of the world need to listen to you in all the ways you preach.” Teresa encouraged the group to live out of the mystery of their call and act with courage in taking steps that will help build the bridges that the world needs. The task is to strengthen and encourage younger members, who are looking for an intercontinental experience of formation. “Look for sisters who can cross the border, find them, send them. Don’t be afraid to do this. Don’t’ be afraid of their dreams.”

During the DSI General Assembly, a group of younger members were invited to join the group in a video conference to talk about their dreams and hopes for the future.

They spoke of the collaborations that are already taking place : Dominican Women Afire, in the USA. The Fanjeaux Study Abroad Project and the Seekers and Sisters Project. They looked to the DSI leaders to make it possible for them to pursue intercontinental formation and finding ways to build bridges across congregations. Younger members want to pursue opportunities to meet face to face to develop a communications structure to help them get know and understand each other better. They want to work together to promote vocations, engage in common study and promote the preaching charism of Dominican Order as women.

The Assembly heard number of reports including from Sr. Marie Therese Clement, OP, International Coordinator, and members of the International Coordinating Council who described the work of Dominicans in five continental regions : Europe, Asia-Pacific, Africa, Latin America and the Caribbean, and North America. Cecilia Espenilla, OP, DSI Promoter of Justice and Peace, and Margaret Mayce, OP, NGO Representative to the United Nations also talked about the urgency to address human trafficking and migration. The meeting also put a spotlight on the hard realities of Nigeria, Venezuela, and Democratic Republic of Congo and the situation in Iraq.

Master of the Order, fr. Bruno Cadore, OP, addressed the Assembly, encouraging members to deeper collaboration among congregations and with the rest of the Dominican Family.

Sr. Helen Alford, OP, Vice Rector of the Angelicum, spoke to the group on : “Retooling Today in the Dominican Tradition for Authentic Engagement in Mission.” A new Dominican Charism Initiative project was introduced and the members talked with Monica Mora, of the International Dominican Youth Movement.

Sr. Margaret Mayce, OP, was elected as the new DSI International Coordinator, for a six-year term. Sr. Margaret currently serves as the NGO-representative at the United Nations in New York City and is a Dominican Sister of Amityville, NY. Her term will begin in the next few months. Sr. Margaret succeeds Sr. Marie Therese Clement, OP who completed her term.