Blessed Jordan of Saxony, second Master-General of the Order of Preachers 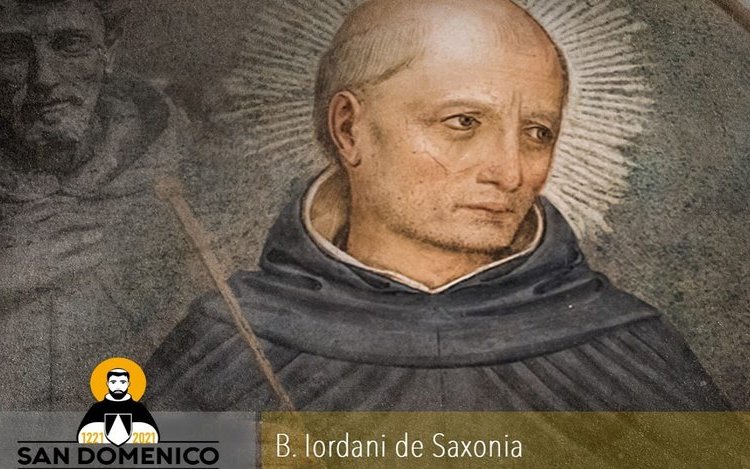 Born around 1190 in Saxony. In 1220 he received the Dominican habit. On the death of Saint Dominic (1221) he succeeded him as head of the Order of Preachers. He died shipwrecked on February 13, 1237 near the Syrian coast. He was beatified in 1825 and is commemorated on February 13. He is the first historian of the beginnings of the Dominican Order ; his Libellus de principiis Ordinis Praedicatorum, probably completed before the canonization of Saint Dominic (July 3, 1234) is the oldest chronicle of the Order.

Little is known about the life of Blessed Jourdain de Saxe before 1219, when he met Saint Dominic in Paris ; he chooses him as confessor and spiritual father, and undertakes studies for the diaconate. The following year he took the Dominican habit and was immediately noticed for his oratorical gifts enlightened by love for the salvation of souls and for the Gospel message ; these donations put him at ease with the poor as well as with academics.

Born in Westphalia (Saxony), around 1190, Brother Jourdain travels a lot even after his appointment as prior provincial of Lombardy : he travels to participate in the Chapters, but above all to announce the Word.

The solidity of the faith and the life of holiness of Brother Jourdain attracted so many souls to his Order : in a short time the number of brothers increased from three hundred to four thousand and the houses from thirty to three hundred. He « works » to publish the first Dominican Constitutions, to give impetus to the missions, to the administration of the sacraments and to the supervision of the right of burial of the brothers in the Dominican churches. He does not fail to defend the universality of the Order and its independence against the interference of the local clergy ; moreover, it is also thanks to him that the Dominican nuns are legally incorporated into the Order, according to the will of the Founder himself.

He is also known for his gentleness : he corrects the brothers with kindness of heart rather than with rigor and discipline, he listens to them, comforts them, also encourages them by letter, when he cannot be present by their side. It is a very simple spirituality, his own, made of union with God and imitation of Christ, of acceptance of trials as an instrument of purification and of meditation on the Passion of Jesus without neglecting the practice of Christian virtues and the gift of ourselves to all, especially to the poor, our brothers : « It is better to lose the tunic than piety », he said. Towards the end of his life he also succeeded in seeing the transfer of the remains of Saint Dominic to a suitable sepulcher and, the following year, his canonization by Pope Gregory IX.

The boat aboard which Brother Jourdain of Saxony was traveling after a pilgrimage to the Holy Land was wrecked near Acre, present-day Akkon (Syria) ; he was not 50 years old. On hearing the news, the brothers of the local community rush to the scene and immediately find the drowned body surrounded by a cross of light. They bury him in their church, but his mortal remains were dispersed following the Turkish invasion. On the day of her death the future Saint Lutgarde had a vision of Jordan in heaven, between the Apostles and the Prophets.