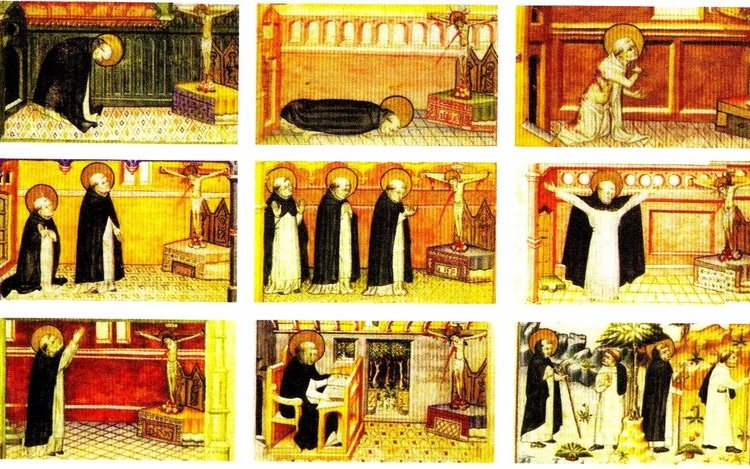 The first friars, those who knew Dominic, all say the same things about his attitude during prayer: o He cried out and wept o He did not own a bed: he prayed all night long. o He used gestures. The authors of the Rossanius Codex wanted their readers to identify with Dominic’s prayer and to transmit it. What a treasure they left us! During this retreat, we are invited to learn from these “icons”.

Regarding the nine ways of prayer:

First stage: 1) Bow 2) Prostration 3) The discipline 4) Genuflection, kneeling Two words summarize this stage: the acceptance of ourselves, of our limitations and shortcomings; the welcoming of God in us, of what we are called to become, as though the Lord were saying: “Free yourself from yourself, and let me enter.” The second word about this stage is a preposition: with—with the Lord, with ourselves, with others. A verse from the Bible corresponds to this: “Speak, O Lord, your servant is listening.”

Second stage 5) Dominic is standing with an attitude of listening 1) Dominic’s arms are extended in the form of a cross, a stance of life, of face-to-face encounter 2) His uplifted hands signify ecstasy, a standing “outside of self”. He asks for the gifts of the Holy Spirit for his brothers. The preposition in applies here: in Him. A bible verse: “I call you friends.” (Jn 15:15)

Third stage 8) Dominic is in constant motion, listening, and involved in loving dialogue 9) Dominic sets out on the road: itinerancy One word summarizes this stage: the gift. One preposition applies here: for. A Bible verse: “Those who remain in me and I in them bear much fruit.” The goal of these nine ways of prayer is that we discover how to reach our own interior dwelling. They correspond to this question in Genesis 3: “The Lord asked Adam, Where are you?”  We are invited to ask ourselves that question. We can begin by considering four great emotions that arise every day: fear, sadness, anger, joy. Conclusion: St. Therese of Lisieux compared the human heart to a lyre, a zither with four strings, to help us understand the love of God, others, and ourselves; the four strings correspond to four types of love:

Filial string: to love as a child, as a child of God the Father. First stage: to allow ourselves to be loved by the Father

String of sisterly love: Second stage: Jesus is our brother; we do the Father’s will

Spousal string: husband and wife (8th way of praying). Dominic is the spouse of Christ

Parental string: Dominic in the 9th way of prayer becomes a father