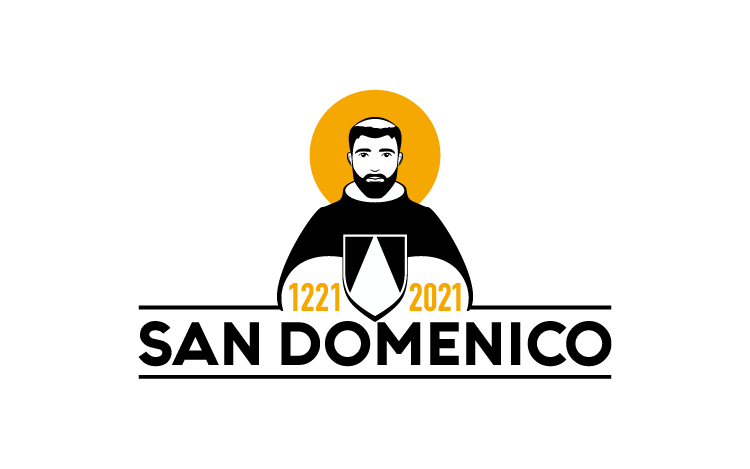 The “Mascarella Table” takes its name from the fact that it has always been kept in the Bolognese Church of Santa Maria della Mascarella, which was where St. Dominic and his companions stayed for the first few months after their arrival in Bologna in the winter of 1218.

The table was painted in tempera on a board measuring 43 × 572 cm, shortly after Dominic’s canonisation (July 1234) and, according to current knowledge, is the oldest representation of the Saint and his friars. It was painted by a Master from the North of Italy around 1235-1240. It shows, in the centre, St. Dominic with a halo, flanked by a series of niches with pairs of friars preachers (24: 12 + 12), all sitting at a table full of bread. Judging from the anonymous artist’s depiction of their faces, the friars seem to come from various parts of Europe: perhaps the painter may have seen them on the occasion of a General Chapter (at that time the Order held its General Chapters alternately in Bologna and Paris). The painting was inspired by the Prologue of the Legend of Pietro Ferrandi (itself inspired by the Bull of Dominic’s canonisation):

“On one occasion God, inviting his elect to an eternal banquet in various places and in many ways, in the last days, in other words at the eleventh hour, sent his servant to tell the guests that they should come, as all was now ready. According to St Gregory the Great, this servant is an Order of preachers that must be sent, in the last times, to warn men’s souls of the imminent arrival of the Judge. Indeed, Scripture forewarns that there would be a new Order of preachers, and clearly states that this Order would be sent forth at the end of the world, affirming: “He has sent his servant at suppertime”. This “suppertime” is the end of the world, we are those for whom the end of times has arrived. Thus a new Order was sent at suppertime, that is to say in the last days. […] These are the Preachers: divine Providence has provided their Order for the dangers of these last times, so that, at the approach of the judgment of him to whom, in humiliation, judgment was denied, the number of witnesses may increase”.

This, then, is the oldest image of what, at the time of the canonisation of St. Dominic, was his own understanding of his mission within the Church.