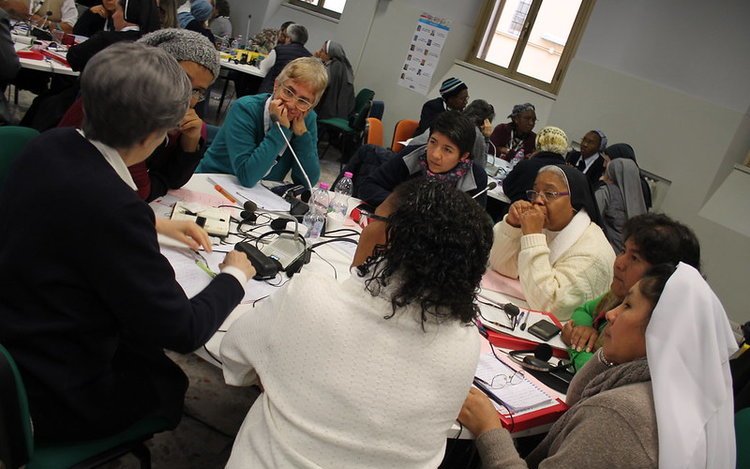 Patrizia Morgante : Why do we speak so much about interculturality within the UISG and why is it important in the context of a religious life ?

Sr Pat Murray : In my opinion the reason that interculturality has now become a key term within the UISG is twofold : one, you have the changing face of religious life and the multicultural nature of it – today, in most congregations, their members come from different parts of the world. I think that we, as women religious, with the differences that have emerged, we’re a mirror of today’s world. It is a challenge to live together as people, as sisters, from many different cultural contexts, mostly because one of the biggest challenges today is to respect differences at every level. Therefore, we have to learn how to live together from an intercultural perspective – but it’s not enough to simply put people together. You must understand the dynamics of culture. Most intercultural writers, and those writing about religious life, would say that when people have different cultures come together, they have to create a new culture, where each culture is contributing to the formation of the whole. It is not easy, and it may be particularly a challenge when there’s a dominant culture – religious life in the past often was founded in a country or in one part of the world and therefore, historically has a dominant culture. As has spread throughout the world, people from new cultures have joined. So, the dominant culture needs to let go in order to create space for the emerging new cultures. It’s not about numbers – it’s about making sure that everyone, no matter from what culture they’re from, find themselves at home in this group, can express who they are and fell that they, as a cultural person, are accepted and recognized.

Patrizia Morgante : Which are the factors, in your opinion, that have caused this change in the geography of religious life ?

Sr Pat Murray : I think when you look at the history of religious life, vocations grow where there is need. In parts of the world when you have very little infrastructure, very few or poor facilities in terms of education and healthcare and social institutions, the Church has responded by creating and establishing the kind of institutions that are needed – and they’re often run by religious orders. If you witness religious orders in those parts of the world, it’s a sign of God reaching out to the world, but also many women living locally are attracted to religious life as a way in which they can work to improve the life of their own people. Besides feeling that’s a call from God, it’s as well a visible sign of how women and women in the Church can make a difference. Now, in the global North, where governments provide the kind of systems that are needed by the people, the call then is to go to where the margins are. And therefore, one of the challenges of religious life there is where the emphasis is less doing and more on the personal and communal life in following Christ. It is much more of the spiritual accompaniment of people in their search for meaningful life, theological formation, praying with, supporting in difficulties, sharing faith. It’s a very different type of insertion into the life of the Church – it is much less visible, but I think it’s profoundly influential. Equally, as countries in the global North become more and more multicultural, because of migrations flows, there’s a whole new challenge to be present with those who are newly arriving into strange and diverse context for them. Some of these people have been trafficked, many of them are trying to find a new home for themselves after fleeing from context of war and I think it’s a different way of helping to integrate people newly arriving into society. Integration is not an easy thing, because for it to happen there has to be the willingness to actually change and learn yourself and to recognize that society will be changed by having new members from different parts of the world.

Patrizia Morgante : What integration has to do with interculturality ?

Sr Pat Murray : Well, if you don’t understand the cultural values of another person, you judge their behavior or their practices through your own cultural lens. I think what happens in that case is there’s the rise in xenophobia and stereotyping people and, in consequence, they remain outsiders. In order to change that I have to move towards the other, who is stranger, but also those who are coming into the new place have to be willing to change too, so that together we create something new. I heard a lovely example in Ireland of a group who were teaching English to Syrians, who would come into Ireland. They set up a common project, where the local group taught English and the Syrians taught them Arabic. There was a mutuality in that and I think it’s enriching for a mutuality of respect, that’s critical if we’re to develop a new society. Where there’s respect and flourishing for each person and for all, that’s what the Reign of God is. A globalized world is becoming possible in a new way, when we’re not stressed, we’re not focusing on individualism and individuality, but we really are engaged in a communal project, where there’s room for all and nobody is left behind. That’s a big dream. I think at the level of politics, at the level of Church’s leadership, at the level of ordinary people I am more and more convinced that it is ordinary people who make the changes – by building bridges at local level.

Patrizia Morgante : Let’s talk about racism in the religious life – does it manifest itself there ?

Sr Pat Murray : Racism is prevalent in society, so there’s no way in which any group is going to escape it. Often you don’t realize you’re racist until you really meet people who are different. When you’ve lived in a monocultural context, where you’re in control, and in some way you take that as a norm, and then the whole reality changes : the group becomes multicultural, the leadership passes to people of other cultures – then you test your own openness and you have to ask yourself : my reaction to this or that person, where’s it coming from ? I think in here and in every person, there is the protection of the self and the protection of one’s own tribe, so the call to religious is to really heartfully examine at a personal and, maybe even at a communal level, our own prejudices and to see how those prejudices might be experienced by others. One of the most important things is : unless there’s honest, open conversation, we can think we’re welcoming, but not realize that the other doesn’t feel welcomed. Or we can think there’s space for everybody, but there’s space, but only, if you fit in to the dominant culture. I think leaders in congregations should to create the conditions where people can honestly express how they feel. There are ways of doing that, but only if we honestly name the reality. In religious life you can see historical traces of racism where people who were different were not accepted into a religious congregation. It happened in the United States in terms of black sisters not being welcomed into the congregations or other parts of the world where again there would have been a lack of acceptance of local vocations into international congregations. We have a sin to acknowledge and we also know today that this kind of barriers are no longer there, but there might be other barriers within, where sisters may not feel welcomed, they feel lesser. I don’t want to generalize, because I think like every family every congregation is different – some congregations have worked and are working on this, others haven’t begun the journey yet.

Patrizia Morgante : Are there any specific indicators of racism within the religious congregations according to you ?

Sr Pat Murray : No, in my opinion it isn’t any different to the kind of indicators that you would find in the wider society. I think that religious life or a local community or a family is a microcosm of a wider society – and whatever is happening in the wider society affects, but also happens within the smaller unit in society. So, as we’re living in a global society, when we see racism happening in different parts of the world, we should honestly say to ourselves : where is racism happening within us, within ourselves ?

Patrizia Morgante : Last question is about which is the role of UISG in this interculturality process and movement ?

Sr Pat Murray : I think the role of the UISG has been to respond to requests of the leaders of congregations for help in this area. I think it’s very clear from Vatican documents like “New Wine in New Wineskins” that this is part of the new wineskins and that we’ve all had to learn that there is a theological and spiritual base to living in interculturality, but there is also very practical knowledge and practical skills to be learned. We’ve all become aware of the fact that we don’t all process information in the same way nor two people react to the same situation and that’s particularly true when you’re talking about differences in culture. We’re also realizing that there’s an overlap and it’s hence that sometimes you ask yourself : is this a cultural question or is this a personality question ? So now within our formation programs, we’ve included a lot of content about preparing people for human formation, from the point of view of psychology and human development, in order to bring the theme of interculturality further in our discussions.