Virtual Audience with the Pope in Chicago 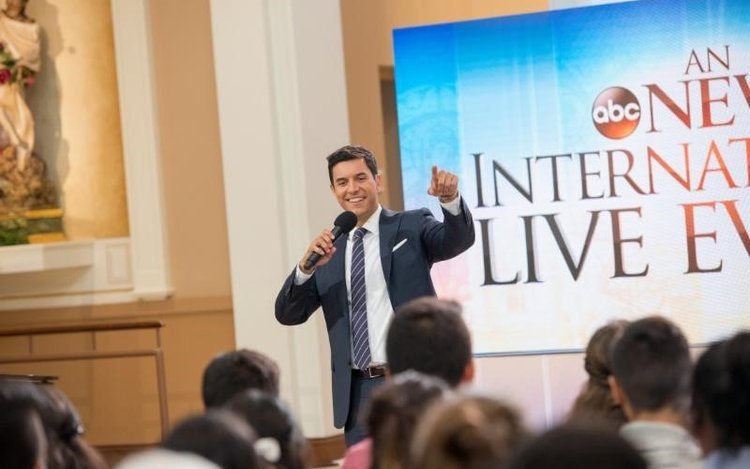 On the 31st of August, Cristo Rey Jesuit High School, where I teach, participated in the first-ever virtual town-hall meeting via satellite with Pope Francis along with persons from two other localities in the United States : homeless persons from a parish in Los Angeles and immigrants from a center in McAllister, Texas. The moderator told us that the pope himself had chosen the three locations because they all worked with the poor and disadvantaged. Giant screens allowed persons in the three places to see and speak with the Holy Father directly.

Two of our students told the pope about their lives and he responded with wise words of advice to them, and beyond them, to all teenagers. One of the students told him about being bullied in her former schools because of her skin disease and how singing had helped her to cope with this. The pope, with a smile, said in English : “Valerie, will you sing a song for me ? Be brave !” And she sang a song to the Blessed Mother, beautifully, in Spanish, for the pope ! The stories of the homeless persons in California and the immigrants from Texas were very moving. The pope listened and responded with great compassion. At one point, he said that he had noticed a Sister in the audience in Texas. He asked that the camera find her—he wanted to speak with her. When the Sister, Norma Pimentel, stood, Pope Francis thanked her for her work, and then said that through her, he was speaking to all the religious Sisters in the United States. He thanked all of us enthusiastically and sincerely for our ministry to the Church and then said, “I love you all !” The pope’s words were much appreciated after the strong feelings that the recent apostolic visitation of United States Sisters had elicited. You can watch the Chicago part of the virtual town-hall meeting here in Englishor here in Spanish. There is a brief advertisement before the video. The entire program was on nation-wide television this past Friday. We are looking forward to welcoming the Holy Father to the United States very shortly !